Sounds like an unrealistic promise, right? But it’s not—and I’ve got the American College of Sports Medicine to back me up. They recommend either doing 20 minutes of intense exercise 3 times per week, or 30 minutes of moderate exercise most days of the week (with “most” typically translated as 5). So 60 minutes versus 150 minutes—which actually means you’re cutting your workout time more than in half.

Here’s my suggestion for maxing out that 20 minutes while making your sweat session fly by: Tabata training, in which you exercise super-intensely for 20 seconds, rest for 10 seconds, then repeat.

The method was named for Japanese scientist Izumi Tabata, who conducted a small but ground-breaking study in which some participants were asked to alternate 20 seconds of all-out cycling with 10 seconds of rest for a total of 4 minutes; they did 7 to 8 sets of that, then repeated the process 5 times a week for 6 weeks. Here’s the cool part: Those folks boosted their fitness way more than did others who pedaled at a moderate pace for a solid hour 5 times a week for 6 weeks. You read that right: those who worked out half as long got better results, all thanks to intensity.

I discovered Tabata last summer while reviewing a terrific DVD called Breathless Body from Amy Dixon, a L.A.-based trainer and exercise physiologist. Dixon’s workout is based on the Tabata method (and has become one of my favorite workout DVDs). Then last week, I came across an excellent new indoor cycling DVD called Short & Sweet (the name is lightweight, but the workouts are not), which includes a 20-minute Tabata session among its 3 workouts. 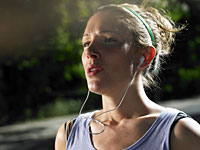 You don’t even need a DVD. You can do Tabata while running, cycling, skating, swimming—virtually any cardio activity that allows you to work intensely. Simply go all out for 20 seconds, then rest for 10 seconds (you’ll want a programmable interval watch or timer). Do that 8 times, rest for a couple of minutes, then do it again; repeat the whole thing 4 more times and you’re done.

Here’s the thing, though: Going “all out” doesn’t mean just working harder than usual. “It needs to be a drain-the-tank effort,” says Dixon. “On a scale of 1 to 10, it has to be a 10.” You’ve got to put everything you have into it, working so hard that you can barely make it through the 20 seconds. And no, you won’t feel fully recovered after the 10 seconds of rest (if you do, you weren’t working hard enough). And yes, you’ll probably grunt and curse your way through virtually every 20-second block, especially those toward the end (as I do). But time will move faster than it ever has during a workout, and before you know it, you’ll be done. And you’ll feel like you’ve accomplished something amazing. Which you have.