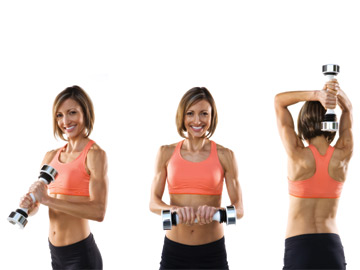 In case you haven’t heard of the Shake Weight, it is, according to its makers, the “revolutionary new way to shape and tone your arms, shoulders and chest.” Basically, it’s a 2.5 pound dumbbell with springs on either end, and instead of merely lifting, you, yes, shake it.

Exercise physiologist Amy Dixon, group fitness manager for Equinox in Santa Monica, Calif., isn’t surprised the Shake Weights are selling so well — according to the American Council on Exercise (ACE), in its first year on the market, more than 2 million Shake Weights were sold and they have since surpassed the 4.5 million mark.

“People are always looking for the new hot product and the quick fix,” Dixon says. “This product promises fast results and has a marketing campaign that promotes the idea of ‘sexiness’ — if you want sexy arms like the people on the commercials, you need a Shake Weight!”

But will it really give us sexy arms?

Wanting to test out some of the claims made by the Shake Weight informercials — primarily that the Shake Weight can “increase your upper-body muscle activity by up to 300 percent compared to some traditional weights” — ACE commissioned a team of exercise scientists from the University of Wisconsin, La Crosse. The researchers compared the degree of muscle activation when using the Shake Weight to using a traditional dumbbell of equal weight, and they came up with some interesting results.

The ACE team tested four different workouts using both the Shake Weights and regular weights: the one-handed biceps shake, two-handed triceps shake, one-handed shoulder shake and two-handed chest shake were compared to a biceps curl, triceps extension, shoulder press and chest fly. Researchers measured muscle activity using something called surface electromyography (EMG) and found that, for all four exercises, the total EMG activity for all four muscles was indeed greater for the “shakes” — on average, total muscle activity was 66 percent greater with the Shake Weight exercises (not the 300 percent the Shake Weight makers claim, but still a significant amount).

Woah. So is the Shake Weight more than just fodder for late-night comedy shows?

Well … sort of. The researchers found out that, although the EMG was indeed a lot higher, no matter which exercise they performed with the Shake Weight, the muscle being worked the hardest was always the tricep — even when the tricep wasn’t the target. Dixon explains, “This is because the tricep is working as the co-contractor, or the breaking force, for the vibration in a majority of the exercises.”

Furthermore, though the Shake Weight did increase muscle activity compared to a regular 2.5 pound dumbbell, the ACE researchers point out that not very many people work out with 2.5 pound weights. In fact, they conclude that the Shake Weight would be most beneficial to people who are on the “lower end of the fitness spectrum” because, essentially, doing something is better than doing nothing.

Dixon concurs, saying, “When your body is used to doing nothing, any stimuli it receives is going to have a positive effect.” However, she continues, “someone who consistently resistance trains will not receive significant gains from using the Shake Weight.”

Dixon also notes, “It is also important to mention that there is nothing functional about the exercises done with the Shake Weight.” In other words, the Shake Weight only trains muscles in a limited range of motion (non-functional), working the muscles isometrically, which means the muscle may get stronger, but only in that limited range. That motion doesn’t translate into movements and activities we do in our daily life.

“I would never discredit a product that could have a positive effect on a person’s fitness,” adds Dixon, “but if someone is really looking to improve their long-term fitness and functionality, the Shake Weight is not going to be your game changer.”

But what if we really, reeaaalllly want to try it?

“If you are going to use the Shake Weight,” says Dixon, “make sure that it is an addition to a regular, functional resistance training program.” She recommends training your muscles in their full range of motion first, and then adding the Shake Weight as a “superset.” For example, do your regular set of tricep push downs followed immediately by a timed set of triceps shakes.